Benedict XVI’s general audience address of Nov. 17, 2010, which he dedicated to St. Juliana.

She became so learned that she could read the words of the Church Fathers, of St Augustine and St Bernard in particular, in Latin. In addition to a keen intelligence, Juliana showed a special propensity for contemplation from the outset. She had a profound sense of Christ’s presence, which she experienced by living the Sacrament of the Eucharist especially intensely and by pausing frequently to meditate upon Jesus’ words: “And lo, I am with you always, to the close of the age” (Mt 28:20).

When Juliana was 16 she had her first vision which recurred subsequently several times during her Eucharistic adoration. Her vision presented the moon in its full splendour, crossed diametrically by a dark stripe. The Lord made her understand the meaning of what had appeared to her. The moon symbolized the life of the Church on earth, the opaque line, on the other hand, represented the absence of a liturgical feast for whose institution Juliana was asked to plead effectively: namely, a feast in which believers would be able to adore the Eucharist so as to increase in faith, to advance in the practice of the virtues and to make reparation for offences to the Most Holy Sacrament.

Pope Urban iv in 1264, instituted the Solemnity of Corpus Christi on the Thursday after Pentecost as a feast of precept for the universal Church. In the Bull of its institution, entitled Transiturus de hoc mundo, (11 Aug. 1264), Pope Urban even referred discreetly to Juliana’s mystical experiences, corroborating their authenticity. He wrote: “Although the Eucharist is celebrated solemnly every day, we deem it fitting that at least once a year it be celebrated with greater honour and a solemn commemoration. “Indeed we grasp the other things we commemorate with our spirit and our mind, but this does not mean that we obtain their real presence. On the contrary, in this sacramental commemoration of Christ, even though in a different form, Jesus Christ is present with us in his own substance. While he was about to ascend into Heaven he said ‘And lo, I am with you always, to the close of the age’ (Matthew 28:20)”.

Urban iv asked one of the greatest theologians of history, St Thomas Aquinas — who at that time was accompanying the Pope and was in Orvieto — to compose the texts of the Liturgical Office for this great feast. They are masterpieces, still in use in the Church today, in which theology and poetry are fuse. These texts pluck at the heartstrings in an expression of praise and gratitude to the Most Holy Sacrament, while the mind, penetrating the mystery with wonder, recognizes in the Eucharist the Living and Real Presence of Jesus, of his Sacrifice of love that reconciles us with the Father, and gives us salvation.

There are numerous lectures, courses and masses that you can access online.  Some of them are listed, with links, on this page.

Download a digital copy of the June 2021 ADNews here

"You shall help to provide for the needs of the Church." 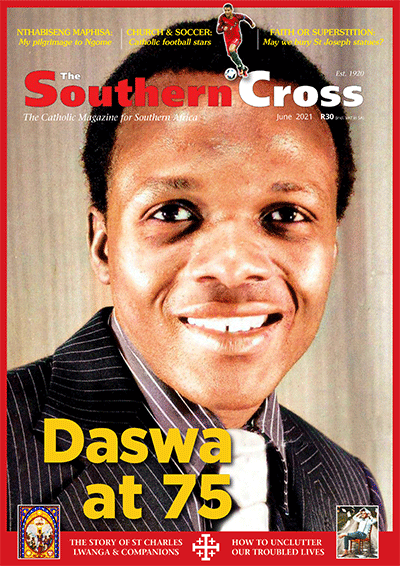 St. Joseph and Fathers’ Day by the Carmelite Sisters of the Most Sacred Heart of Los Angeles On Fathers’ Day, we...

Today, Friday 11 June, is the Feast of the Sacred Heart of Jesus Mass will be celebrated in the church at 6pm...

Fr Tony is not well and has tested positive for Covid. Maryvale Church will be closed from Monday 21st June until 1st July. Fr Barney MacAleer intends to be celebrating Masses for a reduced congregation of 50 people as per Covid protocol this weekend. Everyone needs to discern their own response. Please pray for Fr Tony’s recovery and for all the sick of the parish. There are many masses online.